It's been a while. It appears I've gone the way of many Bloggers before me, having started off with good intentions, but then, err, forgotten.. yes forgotten, to post.

Actually that's a bit of a lie. I've not forgotten really. I've been meaning to post but other things keep on getting in the way. My health for one. Also, I've not really felt like I've had anything particularly worth posting of late. But to remedy that, here is a more or less finished scan of the painting of Minnie, my cat. 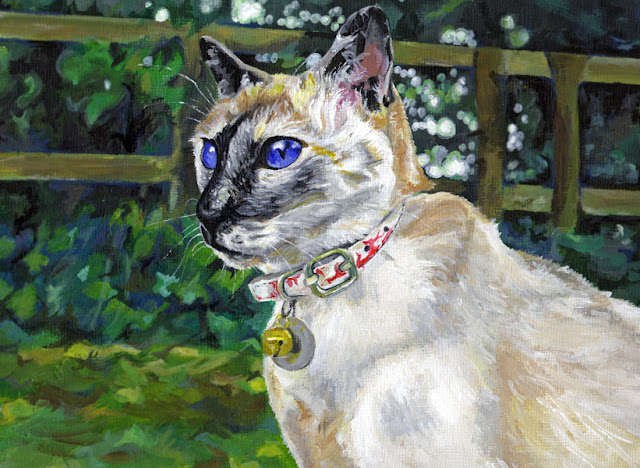 'More or less finished' in that I could keep working on it, but I'm choosing not to as I'd like to move on to something else. I'm not entirely happy with the background; with hindsight I think keeping it more plain and less busy would perhaps look better. Either that or making it as detailed as the foreground (Minnie), as opposed to the annoying In-Between I seem to have settled on. Next time Gadget... Next time.
Posted by Luke at 4:13 pm

Commenty comment. This really is very impressive. Well done. Now you can go back to concentrating on that swearing burglar character we all loved.

hi!
well, this drawing is beatifull!
I agree with you...the background could be better, but it´s nice.
Your brushstrokes are very expressive!
please, still posting your paintings.
Bye!

P.S.: I´m sorry, i'm portuguese and i don't have a good english...but i've one blog where i've got one painting. If you want to see it, please go to this site:
http://launn.blogs.sapo.pt/